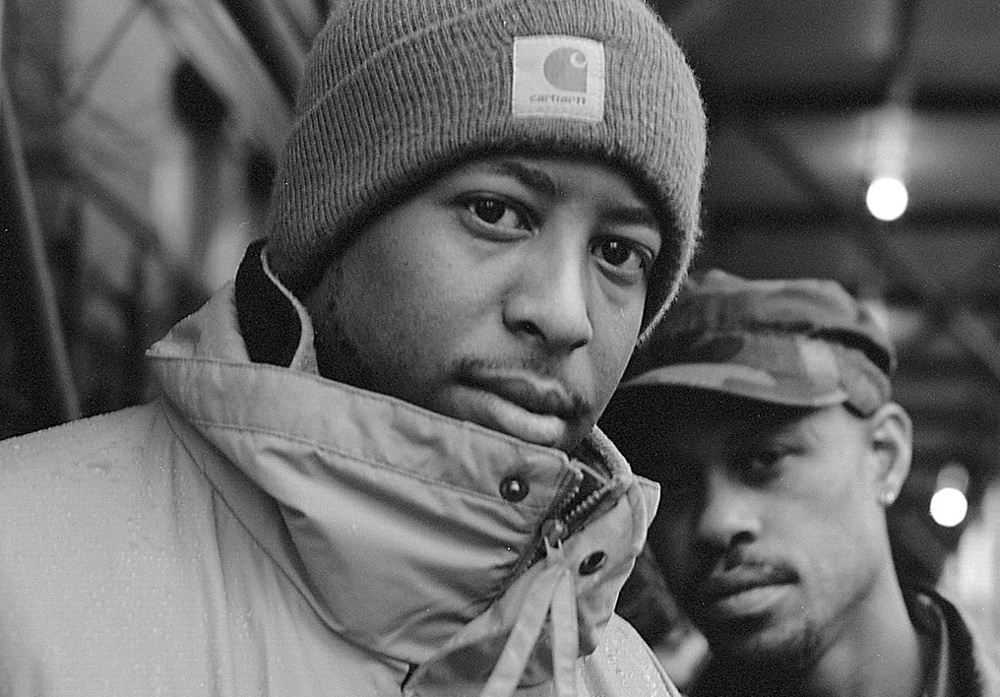 There’s an amazing story that DJ Premier relates near the beginning of this excellent hour + interview with Chairman Mao. Although he’s now synonymous with New York hip-hop, the legendary hip-hop producer and DJ was born and raised in Texas. His grandfather, however, was a BK resident, and Premier would frequently visit him as a child. On his first trip to New York in the fifth grade, Premier was on a subway car that ran over a man who had jumped onto the tracks. The train backed up, and a young Premier peered out the subway window and watched as the man’s disembodied arm wriggled on the tracks. According to an excited Premier, this had been a suicide attempt. “Wow, this is where I want to live,” DJ Premier remembers thinking.To a certain extent, this is just a typical NYC origin story -- the sort of semi-mythological shit you say to sound like a comic book bad-ass. But it also embodies a lot of the qualities of DJ Premier’s music --gruesome, grimey, traumatic, and incredibly vivid. Hip-hop is clearly bigger than one person, city, or era, and any attempts to claim ownership are misplaced -- to say the least -- but few figures seem to embody the music and the culture better than Premier. It’s not that he invented it -- he was nowhere near its mid-70s birth -- but he created a style and sound that was uniquely and singularly hip-hop. Bleary, spiraling samples wrapped around and onto drums that were harder than nails -- pounding, body-rocking combinations of the snare and bass drums known by its onomatopoeia, “boom bap” -- and paired with rough-hewn, Mt. Olympus raps from a rotating pantheon of legendary emcees (Jay-Z, Nas, Rakim, and, of course, Guru). But more than being a singular touchpoint for ‘90s hip-hop, Premier was arguably the most important sample-based musician, ever; his vision of hip-hop pastiche was unlike anything before it, and, due to market forces, it’s doubtful anyone will return to such a nuanced, intricate manner of sampling music, in hip-hop or elsewhere.Like a lot of early hip-hop innovations, the quintessential DJ Premier sound was born partially of necessity. It took a while for Premier to hone his godlike sound, though the journey there is almost as compelling as the destination. Listen to the early albums with Gang Starr, his flagship group with the Boston emcee Guru, and the sound is looser, jazzier. The instrumental “DJ Premier in Deep Concentration” from the 1989 album No More Mr. Nice Guy serves as an initial calling card of sorts for the young producer. The track is anchored by a liberal sample Kool and the Gang’s “Summer Madness” that achieves the neat trick of gliding off the track with soaring, croaking synth line, while also feeling diffuse and guazy -- it’s a multi-textured sonic illusion that be-bop musicians were particularly skilled at pulling off. There are no rapped vocals in “DJ Premier in Deep Concentration,” but Premier weaves in a variety of samples and callouts to various producer (“Prince Paul!”), so that the track both has vocal presence and texture and even a narrative focus. All of the components of his later masterworks are there: the sample-based pastiche, the self-referential callouts, the swagger, the soul.Around 1992, Premier begin to switch up his style. Like a lot of early hip-hop innovations, this evolution was born of necessity. In 1991, Biz Markie was sued for his use of Gilbert OSullivans 1972 hit, "Alone Again (Naturally)." Judge Kevin Duffy’s ruling against Markie not only cost the rapper $250,000, but also meant that hip-hop producers had to be much more careful and either clear their samples before use or cut them up to the point that they were unrecognizable. Premier largely, though not exclusively, decided for the latter course of action. He recognized that it was not just the rhythms or melodies that drew him to classic soul, jazz, and funk, but the textures and sound of the music, so he would cut his drums into millisecond intervals and overlay them on one another, combining them with a cache of synth and piano samples that seemed to emphasize their pure otherworldliness. For Gang Starr, this made sense. They had largely been marketed as a jazzy, college hip-hop, but that didn’t feel entirely true to either Guru’s personality or DJ Premier’s artist ambitions. They were nostalgist, to a degree, but their milieu was more modern and urban. The music they made on 1992’s Daily Operation and 1994’s Hard to Earn reflected this grimier reality. The dizzying organ sample laid of “Soliloquy of Chaos,” the chaotic swirl of “Brainstorm,” or the urgent, corporal drum breaks of “Code of the Streets” signal Brooklyn. It’s broken crack vials and loosey butts, summer nutcrackers and skelly sketches. Rarely has a music so embodied such a particular time and space.This would be the template for all of Premier’s best known productions, from Nas’ hip-hop totum “NY State of Mind” to Biggie’s dizzy disorienting “Unbelievable.” Though the sound undeniably strange and novel, it’s also immediate and visceral, which allowed it to ascend the charts in the mid to late-90s. It’s hard to believe, but, at one point, Premier was among hip-hop’s most on-demand commercial producers. The specificity of his music meant that designation wouldn’t last. Beginning in the late 90s, Southern hip-hop would loosen the genre’s focus -- bringing back the more overt homages to funk and soul -- and the music would move back onto the dancefloor. And New York hip-hop would adopt the more polished nihilism of G-Unit and Dip Set, before later seeming to abandon any notion that there was a unified, tri-state sound. But, for a minute, thanks to Premier, the music was pure, aberrant, and purely hip-hop.