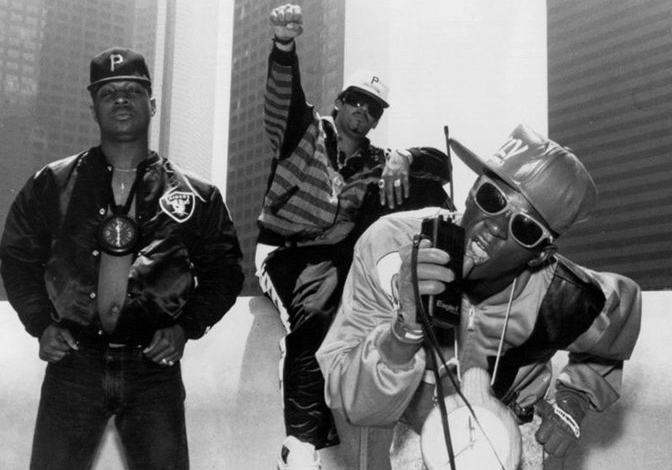 Click here to add to Spotify playlist!The Bomb Squad are one of hip-hop’s greatest production teams, and on Public Enemy’s 1987 debut, Yo! Bum Rush the Show, they established sampling as an art form. As the record turns 30 this month, The Bomb Squad’s intricate approach to beat construction remains as relevant as ever, demonstrating how important reference and quotation were to the development of Public Enemy’s politics and to hip-hop in general.Starting out as an opening act for fellow New York hip-hop outfit Beastie Boys, the early incarnation of Public Enemy heard on Yo! Bum Rush The Show more closely resembles a party-starting posse in the mold of Run-DMC than the fight-the-power force they would become. Though the specters of white supremacy and drug culture loom large in songs like “Rightstarter (Message To A Black Man)” and “Megablast,” lyrically speaking, Chuck D was not yet so overtly topical, focusing instead on interpersonal conflict. However, the intertextuality in The Bomb Squad’s sampling style revealed a more subtle approach to expressing Public Enemy’s worldview.Rather than simply sampling a song’s hook, each track was a dense tapestry of source material, charting the group’s constellation of influences and situating hip-hop within a larger spectrum of styles, from funk to thrash metal—“Miuzi Weighs A Ton” even juxtaposes Tangerine Dream with a disco beat. This cultural melding extends to Chuck D’s rhymes, which quote everyone from Syl Johnson to Aretha Franklin to Kurtis Blow.The Bomb Squad further bolstered their productions with live instrumentation. Though Chuck D would eventually regret writing the song, “Sophisticated Bitch” features a noteworthy highlight: a guitar solo courtesy of then-unknown Vernon Reid, whose band Living Colour had yet to break out into the alt-rock world.The righteous indignation for which Public Enemy is now known may mostly be absent there, but it wasn’t far behind. The militant “Rebel Without A Pause” was released as a B-side to “You’re Gonna Get Yours” later in 1987, and it would alter the group’s course forever. But even if Yo! Bum Rush the Show reminds us that Public Enemy didn’t arrive fully formed, its 30th anniversary presents an opportunity to appreciate the group for their sonic innovations, and in this playlist you’ll hear how The Bomb Squad laid the roots of a revolution with the sounds of the past.