Currated By:
Todd Hyman
Published By:
The Dowsers
Post By
Todd Hyman 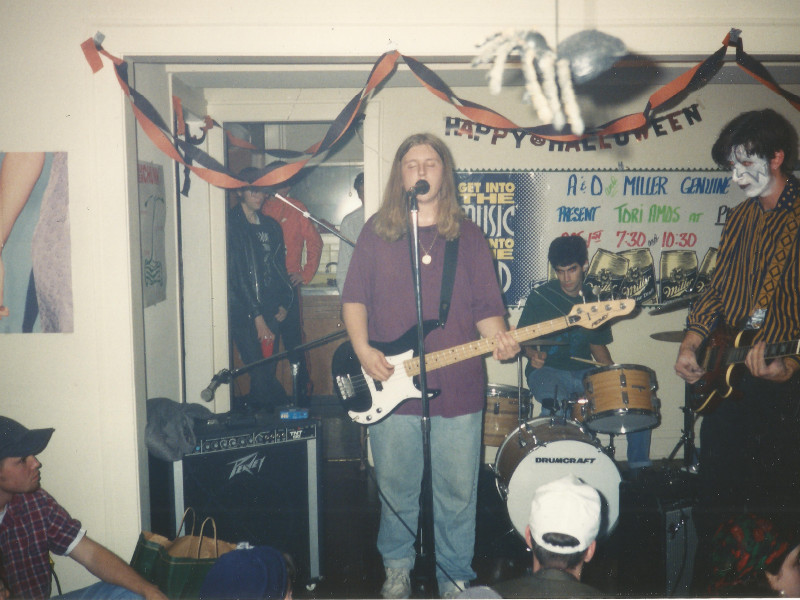 Since 1999, Carpark Records has been at the forefront of indie rock’s 21st-century evolution, releasing foundational early records from the likes of Beach House, Toro y Moi, Cloud Nothings, Dan Deacon, Speedy Ortiz, and many more. But this month, the label is looking back, by shining a light on two forgotten contenders in the early-’90s Chicago scene: Wendyfix and Remy (pictured above), both of whom featured Hyman himself on drums. With reissues of Wendyfix’s We Have the Cracks and Remy’s self-titled EP hitting stores this week, we asked Hyman to create a playlist that charts his transformation from aspiring 1990s indie rocker to founder of one of the most vanguard record labels of the 21st-century. I’ve been asked to chronicle my music listening habits from the early ’90s to the founding of Carpark in the late ’90s. I feel like I had three eras of music listening during this time.

In the fall of 1991, I moved to Chicago to go to college at Northwestern University. I was super-stoked to start DJing at their college-radio station, WNUR. The first week I got there, my friend Jon Solomon (who was also in wendyfix with me) told me we should get tickets to this Nirvana show. I’d never heard of them. But our radio station was playing the first single, “Smells Like Teen Spirit,” a lot.

It was the first show I went to at college and, to this day, is still the craziest. It was at the Metro. Good thing we bought our tickets a week or so in advance, because there was a line all the way down Clark Street to Addison of people wanting to get in. There were so many people crammed in there that, when people were jumping, my body was literally lifted off the ground with them. I had to go to the back towards the end because I felt like there was not enough air to breathe. The show was a couple weeks before Nevermind came out. Soon after, our college-radio music director pulled the “Smells Like Teen Spirit” CD single from our library because it was getting too popular.

I was also a big Anglophile at the time and would pick up a copy of the NME or Melody Maker just about every week from our student book store. There was a pretty interesting feature about an artist called Aphex Twin that fall. I decided I wanted to hear what it sounded like. I went to Reckless and Dr. Wax but no one had it. Finally, I had to take the El all the way down to Lincoln Park to visit the Tower Records at Clark and Fullerton. They had the biggest “import” section in town then. Selected Ambient Works 85-92 was mine!

Towards the end of my freshman year, I remember reading a really interesting feature review in the NME about a new band called Stereolab. I still remember buying their debut full-length, Peng, at Reckless on Broadway right before I went home for the summer.

In my freshman year, I was keen to get involved as much as I could with independent music. I interned at Touch and Go Records most of that school year. By the time I took the El down to Sheridan and transferred to a bus that went down Irving Park past Western, it took almost an hour and a half to get there from Evanston. The office at that time was in an old industrial space, I believe. Dave Yow (The Jesus Lizard) and Britt Walford (Slint) seemed to be doing a lot of carpentry work there. I remember those dudes being really funny. One of the perks of interning was that I got free music. One day I was given an advance promo “cassette” of Polvo’s Cor-Crane Secret. It was a clear cassette with no paper art in a plastic case. Still have it somewhere….

In my sophomore year, I started playing drums in a band with my friends Jon Solomon and Ted Pauly from WNUR. We were named Wendyfix after a local high-school tennis star. Jon was away most of my junior year, so we brought on Brian McGrath to take his place. There weren’t too many indie bands in Chicago doing the quiet/loud moody guitar thing then. I recently decided to digitally release all the tracks we ever recorded. “Ridge” was always one of my favorites.

In my junior year, I started playing drums in another band with more WNUR friends, Peter Schaefer and Matt Walters. Remy was more on the Pavement/Polvo/Archers of Loaf tip. “Coco Pebbles” was one of the few jams we recorded before I graduated and moved away.Here are some other tunes that played a big part in my collegiate life:Unrest, “Cherry Cream On”Spacemen 3, “Come Down Softly to My Soul” *Slint, “Washer”Faust, The Faust Tapes *Bedhead, “Bedside Table”The Incredible String Band, “You Get Brighter”Seefeel, “Imperial”Big Flame, “Every Conversation” *Boredoms, “Hey Bore Hey” ** = not available on Spotify

I graduated college in 1995 and moved to New York. One of the things I ended up doing there was working as the indie music buyer for Kim’s West, which was a record store/video rental place at Bleeker and West 10th street in the West Village.I wouldn’t have had this job had Other Music not opened that same year. I started at Kim’s West working as a video-rental person. But the music buyers at Kim’s Underground (also on Bleeker) opened Other Music and suddenly Kim’s Underground was in need of music buyers. So the music folks at Kim’s West went over to Kim’s Underground to get things organized. And I ended up filling in the indie-music buyer spot at Kim’s West.I listened to a bunch of dub, French ye-ye, drum ‘n’ bass, MPB, ’60s/’70s easy listening, and IDM during this time.I moved back to Chicago for a year from 1996 to 1997. I worked briefly at Reckless Records and spent a lot of time at Dusty Groove. After Chicago, I went to Glasgow, Scotland for a 12-month graduat- school program for Popular Music Studies.I slowly stopped listening to indie rock around this time. I thought it was a dying genre. All the new music I was consuming was slowly transitioning over to digital and electronic music. I had burnt out on indie rock.Prince Far I, “Plant Up”Autechre, “Clipper”Maurizio, “M07A”Alec Empire, “Bang Your Head”Caetano Veloso, “Tropicalia”The Congos, “Fisherman”France Gall, “Mes Premieres Varies Vacances” *Marcos Valle, “Mentira”Plug, “Drum ‘n’ Bass for Papa” *Roger Nichols and the Small Circle of Friends, “Love So Fine” *Rotary Connection, “If I sing My Song” *µ-Ziq, “Brace Yourself Jason* = not available on Spotify

3. BACK TO NEW YORK CITY

I moved back to NYC at the end of 1998 and ended up working at my friend Rich’s record store Etherea in the East Village. All us record clerks there were pretty tight. Dance-music culture was our thing. Indie rock seemed passé. We had a weekly DJ/electronic music night and spent a lot of time listening to 12 inches at dance-music shop Temple Records a block away on Avenue B.Here’s some tunes I spun a lot during this era:Dopplereffekt, “Speak ‘n’ Spell” *Aril Brikha, “Groove la Chord”Giorgio Moroder, “From Here to Eternity”Eddy Grant, “Time Warp” *Frankie Knuckles, “Baby Wants to Ride”GAS, “Eins” *Jorge Ben, “Hermes Trimegisto Escreveu”Isan, “Clipper”Casino Versus Japan, “It’s Very Sunny”Lime, ”Angel Eyes”Moodymann, “Misled”Pepe Bradock, “The Charter” *Sparks, “Beat the Clock”Thomas Bangalter, “Turbo” *Throbbing Gristle, “Hot on the Heels of Love”Tones on Tail, “Lions”Tuxedomoon, “No Tears”Closer Musik, “One Two Three (No Gravity)”I was mostly buying techno, house, and electro 12 inches at this time. I was DJing a lot. Our night, Invisible Cities, put me in touch with a lot of the electronic artists that initially released music with us. Carpark was born! That means the end of this playlist. How Carpark moved away from exclusively electronic is a playlist for another time.* = not available on Spotify