Whatever Happened to My (Early 2000s) Rock n Roll? 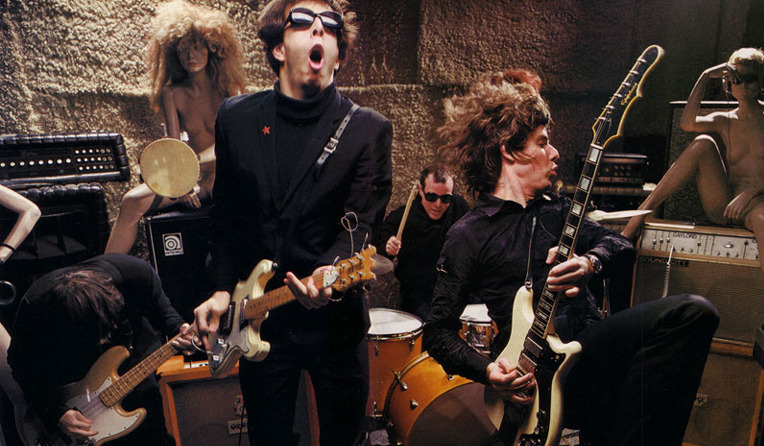 When Black Rebel Motorcycle Club sang, "Whatever Happened to My Rock n Roll" on their 2001 debut, they were gazing upon a contemporary rock landscape overpopulated with backward red baseball caps and greasy grunge-oil salesmen, and lamenting the lack of raw, raucous, life-changing (and corrupting) devils music on the radio. In this case, the complaining actually worked: Within a year, BRMC found themselves standing alongside The Strokes, The White Stripes, The Hives, the Yeah Yeah Yeahs, Interpol, and many other disgruntled guitar-slingers, perched on the precipice of the last moment in history when the words "rock" and "revolution" could be uttered together with a straight face. And mobilizing right behind them were all the bands on this playlist——groups that may have enjoyed a few spins on Subterranean, earned a glossy magazine spread or two, got name-dropped by Jack White in an interview, or scored a prime opening slot on a Franz Ferdinand tour, but never quite achieved the same notoriety or longevity as the aforementioned acts.The early 2000s were, of course, a transformative moment in the music industry: The advent of mp3s and file-sharing opened up new portals for underground bands to achieve more widespread visibility; at the same time, old-school publications like NME and SPIN still wielded enough king-making power to anoint new rock saviors on a seemingly weekly basis, while labels were scooping up any band with unkempt hair and thrift-store blazers. The result was a cyclonic swirl of hype that sucked in MTV2-ready arena-indie acts (Longwave, Ambulance Ltd.), stylish post-punk revivalists (The Stills, Hot Hot Heat), unruly post-punk revivalists (Ikara Colt, Radio 4), unrulier post-hardcore miscreants (The Icarus Line, The Bronx), post-hardcore 70s-rock fetishists (Danko Jones, Rye Coalition), brainiac Brits (The Futureheads, Clearlake), seasoned garage acts gunning for a long-deserved close-up (Billy Childish with the Buff Medways, Mick Collins with the Dirtbombs), new-school misfits (The Ponys, The Gris Gris, Vietnam), and, thanks to The Hives surprise crossover success, an uncommon amount of Swedes (Sahara Hotnights, Division of Laura Lee, Mando Daio, The Concretes)——not to mention Canadians (The Deadly Snakes, Tangiers, The Marble Index), New Zealanders (The D4, The Datsuns), and Icelandians (Singapore Sling).Though a handful of these acts have managed to duke it out to this day, many didnt survive the 2000s. And a quick glance at this years Coachella line-up shows that the question posed by Black Rebel Motorcycle Club at the top of this post has, in the long run, only become more existentially pertinent. However, if the early 2000s garage-rock uprising didnt alter the course of popular music in the way its adherents had hoped, its impact can still be felt in less tangible ways. The eras blurring of indie aesthetics and mainstream aspirations has become manifest in everything from satellite-radio formats to boy bands sporting skinny jeans and salon-sculpted messy haircuts to the sheer number of annual alterna-festivals that didnt exist before 2001. Meanwhile, Lizzy Goodmans recent tell-all oral history Meet Me in the Bathroom has effectively mythologized the Strokes heyday for a new generation just as Please Kill Me did with the 70s CBGB scene (with a documentary adaptation to come). And right on cue, several long-dormant early-2000s phenoms——including Franz Ferdinand, the Yeah Yeah Yeahs, and BRMC——are resurfacing with new albums and/or reunion appearances; you can also expect 2018 releases from Jack White, ex-Walkmen singer Hamilton Leithauser, and Julian Casabalancas garage-prog side band The Voidz.But here, we remember those bygone would-be hype magnets who are less likely to fire up newsfeeds in 2018. Just as Lenny Kayes 1972 compilation Nuggets commemorated the countless short-lived garage bands that formed in the wake of the mid-60s British Invasion, this playlist forsakes the most hyped and heavily rotated bands of the 2000-2005 era to focus on the forgotten phenoms, unsung instigators, and steady-as-she-goes survivors who, in their own little ways, intensified the hysteria of that moment. (It also excludes groups like The Kills, The Black Keys, and Gossip, who, while still relatively under-the-radar at the time, would go on to much greater success. You may also note the absence of The Libertines, who quickly transcended their second-hand Strokes roots to spawn a landfill-indie legacy all their own.)This is a mix for anyone who actually bought a stellastar* single based on the NMEs recommendation, anyone who was momentarily convinced The Mooney Suzuki (pictured at top) were the future of rock n roll, and anyone who thought Elefant would be as big as Elephant. Our Cheap Monday jeans may not fit anymore and our once fulsome shag cuts may have given way to receding hairlines, but lets do a bump for old times sake——this bathrooms got your choice of 50 stalls.